In a previous post, we discussed a method for conserving a phoenix channel instance state between crashes that was based on ETS tables.

In this post, we are going to see how to achieve similar results by using a a pair of processes instead as in this example.

a reminder about conserving state

OTP GenServers are able to retain state between calls, in erlang and elixir it is often discouraged to code defensively so we basically let GenServers crash in the event of failure since they are going to be usually restarted by a supervisor.

When a GenServer crashes it looses its state, so if the retained state is important we need a way to save it and restore it between crashes.

using a pair of processes

Assuming that we have the Server GenServer holding state S, we can create a second GenServer named StateContainer for example that is responsible for holding the state S, both GenServers will be supervised by the same supervisor named ProcSupervisor, consider the following diagram: 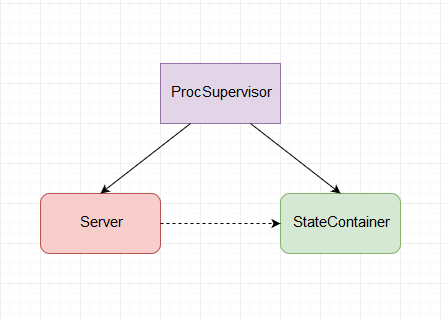 The Server GenServer depends upon the StateContainer, when Server is initialized(under start_link or init) it checks StateContainer for any previously saved state and when it is terminated it uses StateContainer.set to save its state.

The ProcSupervisor restarts any of Server and StateContainer when they crash.

In the excellent Programming Elixir book under chapter 17 OTP Supervisors, there is an example demonstrating how to achieve GenServer state conservation but with unnamed processes.

This post’s example uses named GenServers to simplify things and to keep them concise. The example from the book is more interesting and shows how to dynamically create multiple sub supervision trees instances similar to the following: 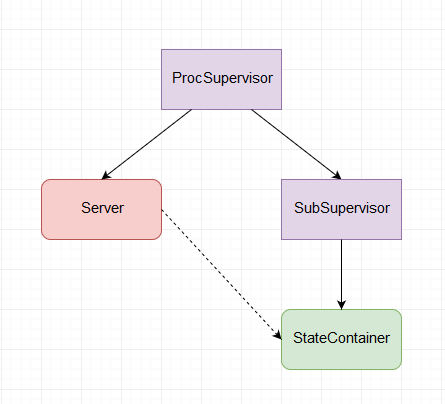 why not putting the state in the supervisor

OTP supervisors are able to hold state as well, one might think that it would be possible for a supervisor to pass its pid to the supervised GenServer that subsequently uses any eventually defined interface on the supervisor to store and retrieve its state.

The previous sounds appealing as it allows to basically avoid the overhead of creating a support process for each stateful GenServer, unfortunately we can’t mess around with the supervisor’s state tuple.

Conserving GenServer state can sometime be a required, so far I am aware of two methods: