I first encountered the Circuit Breaker design pattern in the excellent Release it! book, in which it is described as way to build stability in a back-end system.

Since I am currently building a back-end service for an actual mobile application, I decided to play around with the concept in C# and Elixir.

This is going to be 3 part post, in this part we are going to discuss the basic principle as well as the potential benefits of using a Circuit Breaker.

Let’s consider a web service deployed in a production environment fulfilling requests via a REST API. This service depends upon a database that is deployed on a different node.

Unavailability error conditions can be for example timeout errors indicating that a system is unreachable or access violation errors eventually indicating a bad configuration issue.

These unavailability error conditions can be transient i.e. spanning to at most a couple of requests but sometimes they might last for a considerable amount of time(here considerable depends on the situation).

For example, suppose that the database is under a heavy load and that its response time is decreased enough to cause timeout errors on the web service side.

Instead of shedding more load on the database, it would be nice if the web server did the following:

Something more useful can be for example:

The circuit breaker pattern allows us to structure the integration point cleanly when implementing the previously described behavior. 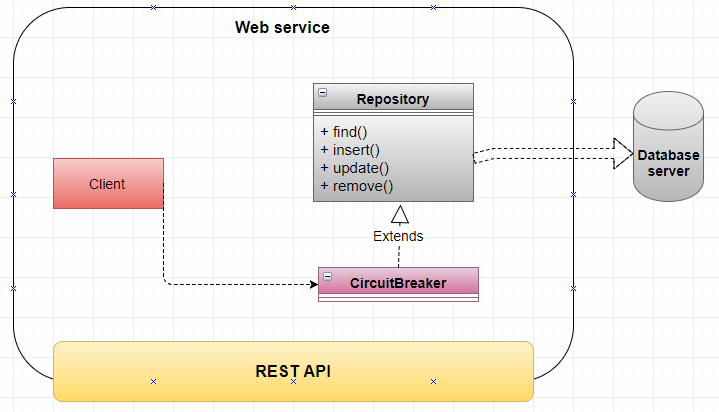 CircuitBreaker objects are stateful and respond differently depending on their state.

Here we can see that the circuit breaker can be in 3 different states:

CircuitBreaker objects respond to requests normally when in Closed state. At same time they keep track of the occurring errors (by counting or occurrence frequency calculation), when a predefined error limit is reached the object transitions to the Open state.

When entering the Open state, a transition to the HalfOpen state can be scheduled to occur after a certain amount of time. When in this state any call to the methods of the CircuitBreaker will throw an exception indicating that the service is temporarily unavailable.

The main benefit from using a circuit breaker in an integration point is, as we pointed out previously, to acknowledge the fact that the external service will be unavailable for some time and to try to do something useful while it is down.

This allows to improve the stability of the system by assuming that any external service will fail.

I have heard countless stories about how the Netflix folks builds and operate their services while targeting very high availability goals.

I invite you to checkout this post to get a sense of how resiliency can be build in software services.

Also checkout this post by Martin Fowler about the circuit breaker pattern. Finally, in the upcoming part we will see an example of a circuit breaker in C# application using a MongoDB database service.