In the previous post, I articulated the idea of a reactive form tag helper for asp.net core that leverages information in a c# view model class to automatically generate a fully functioning html form.

In this post we are going to mash on a first attempt to implement the dynamic form tag helper.

You will notice that I slightly renamed the tag helper. I think that dynamic describes this component better than reactive which can be a misleading hint to the reactive paradigm.

In this first attempt we are going to create the DynamicFormTagHelper. For the moment it will just handle generating forms for view models that contains exclusively properties that belongs to a what I consider a simple type (string, int, DateTime, bool). The following is the view model class that will be used in the example:

The DynamicFormTagHelper will be used as in the following example:

The previous cshtml view, which is strongly typed by the PersonViewModel class, contains an occurrence of the <dynamic-form> tag helper. Notice that the view model instance is passed to the tag helper via the asp-model attribute.

The responsibility of the DynamicFormTagHelper will be to leverage the metadata available in the PersonViewModel class in order to generate the following form: 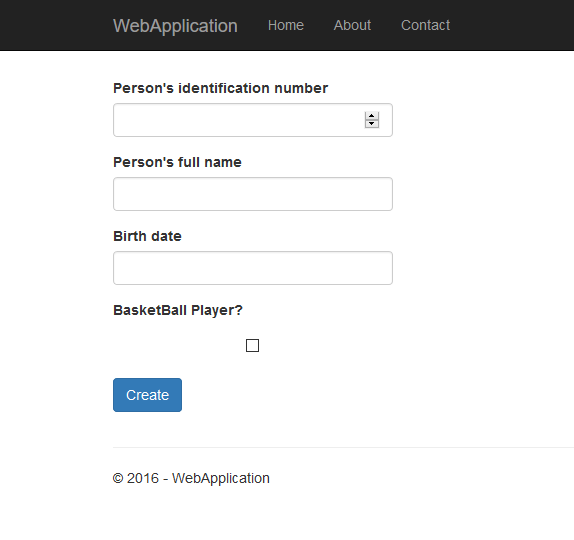 Of course the form will have to handle basic client side form validation (the Id and Name fields are required) and actual posting of the form(in our case to the /Home/Index action specified in the asp-action attribute).

This example uses the bootstrap form styling, if you are not familiar with bootstrap’s form-group and form-control classes you may want to check them out first.

The strategy to generate the form is pretty simple: for each property of the view model generate a form group containing:

The resulting form groups are then wrapped in a form element and a form group containing the submit button is added.

The following is the actual DynamicFormTagHelper class:

The DynamicFormTagHelper requests the injection of the current ViewContext as well as of an IHtmlGenerator instance. These two objects are needed by the existing tag helpers that we are going to use.

First a StringBuilder instance (builder) is created in order to build the form’s html markup that will be subsequently generated.

Then the method iterates over the properties of the passed view model object and uses the FormGroupBuilder.GetFormGroup method to generate a form group for each writable property, each form group’s html markup is of course appended to the StringBuilder.

Next the submit button form group is appended to the generated markup.

Finally, the TagHelperOutput argument is correctly populated with the right tag name (form), attributes (method and action) and content.

The most interesting behavior, which is the form group generation, is encapsulated in the FormGroupBuilder.GetFormGroup static method.

This method leverages the existing LabelTagHelper, InputTagHelper and ValidationMessageTagHelper tag helpers to generate the form group. The FormGroupBuilder.GetFormGroup is somewhat complex, let’s start analyzing is behavior one layer at a time.

The following listing is the definition of GetFormGroup:

Each of the label, input and validation message elements is generated and then wrapped in a div that has the form-group class.

buildLabelHtml, buildInputHtml and buildValidationMessage are private static methods that generates the actual html markup, the behavior of these 3 methods is pretty similar.

Let’s now see the definition of the buildLabelHtml method:

GetGeneratedContent executes the tag helper instance it receives as argument and returns the html content generated. Notice here how this method depends upon the ITagHelper interface which allows it to handle virtually any possible tag helper.

The following is the definition of GetGeneratedContent:

In order to call the ProcessAsync method on the passed tag helper instance we have to first create respectively a TagHelperContext and a TagHelperOutput instance.

In the current implementation we don’t handle eventual child content so we just create a statement lambda that returns empty content.

The created context and output objects are then used in the tagHelper.ProcessAsync call which will populate the output object.

Finally, the renderTag extension method uses the information in the output object to generate the actual html.

The implementation of the renderTag method is straight forward, you can inspect it along with the full example in the github repository.

This first step looks pretty promising, I invite you to run the example and to try the working client side validation. But some interrogations still remains:

Digging the asp.net mvc code base might help to provide some answers.

In the next post I will try to figure out more stuff and to add complex typed properties handling.