Lately, I was prototyping around the idea of creating asp.net core tag helper that will basically behave like the angular 2’s dynamic form. The idea is to have a tag helper that generates automatically a form from a C# model class in order to avoid coding the form cshtml by hand which can be sometimes tedious and repetitive.

During my fiddling I came across the need to render a tag helper inside the Process method of another tag helper.

In this post I wanted to share what I discovered so far, we are going to see a very striped down example of how to implement the aforementioned behavior. The full code for the example is available on Github. 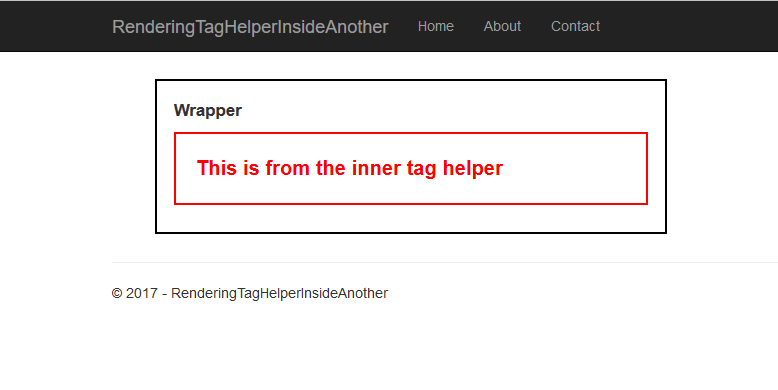 We can see here that we did not use the InnerTagHelper , yet it gets displayed.

As we can see in the previous code the InnerTagHelper.Process method just sets the output html tag to be a p element, sets a class attribute for styling purposes and finally fills the content of the paragraph with the "This is from the inner tag helper" phrase.

Now let’s take a look at the WrapperTagHelper.

In order to render a TagHelper we need:

The TagHelper.Process method is then called and the result can be accessed in the TagHelperOutput instance. Consider the following snippet from the WrapperTagHelper’s code:

The WrapperTagHelper.Process method uses the private renderInnerTagHelper to get the content generated by the InnerTagHelper, let’s dissect this method.

The constructor for TagHelperOutput needs the following arguments:

Finally, after calling Process output will be populated with the generated content. All we have to do now is to generate the actual Html tag before returning it.

After a little a bit of experimentation, I still have some interrogations worth considering:

I will of course share the answers as soon as I get the interrogations figured out :-)