In a previous post, we presented the Circuit Breaker design pattern and discussed it usefulness in building stable back-end services.

In this post, we are going to take a look at an example .NET Core implementation of the pattern that you can find in this Github repository.

In this example, we have a .NET Core console application that uses a MongoDB database instance, a very simple structure:

Person is a very simple C# class, here is its definition:

When executed the console app will perform 100 sequential operations, in each iteration the program randomly selects one of the two previously described operations(read or write).

Executing the program with a running database instance produces output similar to the following:

By killing the database instance you will start seeing timeout errors as follows:

When Config.CircuitClosedErrorLimit is reached the circuit gets opened:

Finally, starting back the database instance will cause the circuit to close at some point:

The following class diagram depicts the internal structure of the console application: 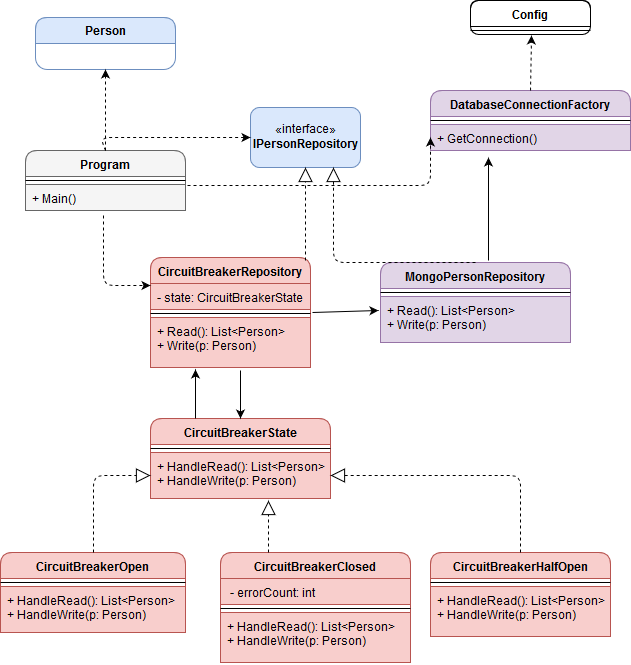 The Programclass contains the Main method which is the entry point of the application, this is where we implemented the previously described behavior.

The DatabaseConnectionFactory is responsible for creating and returning a MongoClient instance that is going to be used by the MongoPersonRepository to issue requests to the database instance.

The MongoPersonRepository implements the IPersonRepository interface and is the actual gateway to the external MongoDB instance, as you can see in the following this class is not used directly by Program.Main:

Now let’s take a closer look at it.

In the basic principles post, we mentioned that the circuit breaker is a state machine that has 3 states with defined transitions:

Essentially, state machine objects execute different behaviors depending on their state, this can be implemented by using nested if or switch statements, by using a decision table or by using the state design pattern.

In this example, the CircuitBreakerRepository defines a class hierarchy that is useful for handling state specific behavior and state transitions.

The CircuitBreakerState abstract class represents a state handler and have three concrete sub-classes:

The state pattern allows us to factor state machine code very neatly, to learn more about it you can checkout the following:

This example is a very basic and simple implementation, it is possible to implement more sophisticated behaviors such as:

These are left as an exercise to the reader