In previous posts, we discussed the Circuit Breaker design pattern and we made a simple C# implementation.

This will be the last post in our circuit breaker series and we will discuss an Elixir/OTP implementation available in this Github repository.

In this example, we have a very simple OTP application that uses Wikipedia’s api:

For the sake of simplicity the application performs a single operation which getting extracts from articles having the titles “Earth” or “Mar” via the this url: https://en.wikipedia.org/w/api.php?action=query&prop=extracts&exchars=100&explaintext&titles=Earth|Mar&continue&format=json which, by the way, is not very RESTful.

When invoking the CircuitBreaker.main function the application will perform multiple successive queries with some delay between each one(800ms).

Executing the main function will produce the following output when the Wikipedia API is available and reachable:

By disabling the internet connection on the machine, you will start to see timeout and non existing domain errors:

When the error limit is reached the circuit transitions to the open state:

Finally, when re-enabling the internet connection the circuit will transition back to closed at some point: 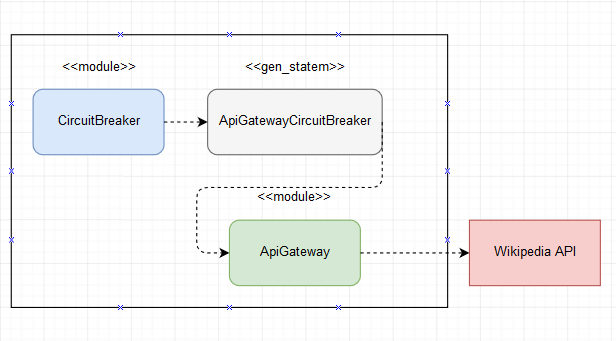 The top level CircuitBreaker module contains the main function which runs the example:

The CircuitBreaker.ApiGateway module acts as a gateway to the Wikipedia api and provides essentially a single fetching operation:

Here we used the HTTPoison library to perform http requests.

The CircuitBreaker.ApiGatewayCircuitBreaker is implemented as gen_statem which is an OTP behavior that allow us to create state machines.

When using gen_statem, a single module can be sufficient to implement the state machine. This requires way less moving parts than the C# implementation in which we had to create a class for each state by following the State Design pattern.

States are modeled as function, for each state we define multiple functions that matches each call that we need to handle for that state.

Bu using the gen_statem behavior I realized that it is much more convenient than the State Pattern for implementing state machines.

As we mentioned in the C# example’s post, more sophisticated actions can be implemented when the circuit is open and we can base the circuit opening on more advanced statistical measures that simply counting errors.

Finally, I would like you to checkout the fuse Erlang library that allows you to create ETS table based circuit breaker. According to its maintainer and creator it is highly reliable and rigorously tested, so check it out.